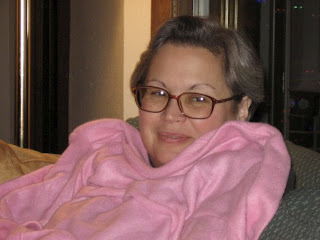 Mid-morning it was still -8 degrees outside here on the prairie. The local cycle shop owner, from whom we’ve bought two bikes, couldn’t come look at the broken treadmill because his shop pipes were frozen. When we stopped in to talk treadmills with him later in the evening, he said this is the worst winter he remembers in a decade and a half. When he was a kid, he said, winters like this were the norm.

I spent the first 20 years of my life in Michigan, home to many lakes and much lake effect snow. From the middle of sixth grade until the end of my sophomore year in high school, my family lived in Sault Ste. Marie, across the ‘river’ from Soo, Ontario. Cold country, people. See-your-breath-snow-to-the-rooftops country.

I don’t ever remember being cold, except once. And then it wasn’t in the winter. My 7th grade science teacher, Mr. Herring, took a small group of us camping in late October in the northern Michigan woods. I’ve never been so cold in my life. Needless to say, my idea of camping is staying at the Holiday Inn.

A couple people have gently suggested that perhaps age has something to do with feeling the cold more now. You know who you are. Thanks.

But I think it’s not just the aging body, it’s the aging frame of mind. Certainly, I have more padding now to keep me warm than I did then.

Who has time to feel the cold when you’re a freshman in high school besotted with a senior boy with beautiful blond hair whose mother is one of your mother’s best friends from church? A boy who gave you a ride home from school on a frigid winter day because, even though you got a ride to school, you always walked home. Everybody did. Unless they could drive. Michigan kids are tough. Or were.

I’ve become a winter wimp, whining and complaining like I invented the concepts.

No more. I’m gonna channel that inner 15-year-old who went snowmobiling with another boy -- some pretty cute boys in the mitten state, but I married a wonderful Iowa boy -- on a snowy winter night through the woods with a group of friends and never felt the cold.