You say you want a resolution…. 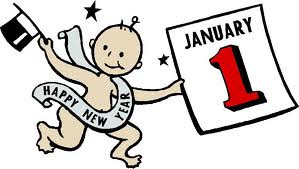 Last fall I started blogging to jumpstart my creativity and to work through issues of aging, etc. Fifty loomed like the Sword of Damocles, and I was on the verge of fulfilling my lifelong dream of writing fulltime.

What a journey. That I would actually use the term ‘journey’ shows what a long, strange trip it’s been. This excursion soon derailed. The first month of the new year brought highs (birth of my newest niece, Reese) and lows (unexpected death of my beloved Aunt Judy, my mom’s kid sister).

Suddenly I was one of those writers who found excuses not to write. Years ago my mom/writing partner and I penned one of our favorite romances ever in the midst of the breakup of her 40-year marriage. If we were under deadline in a tsunami, the book would get done. That’s just how we roll.

But I wasn’t rolling at the beginning of the year, I was thudding. The deadline work got done, but nothing new or creative blossomed.

The rocky road of 2010 continued. Memories of the good still comfort, the bad doesn’t bear repeating. This December brought a mini meltdown from me over my college-age son moving into an apartment five minutes away. This is the son who’s been overseas twice…the first time at age 16 as a foreign exchange student.

Holding on and breaking down?

And then I turned 51 the day after Christmas. The promise of a new year and new beginnings creaked to life.

My dear friend and prolific romance writer Holly Jacobs doesn’t make resolutions, she says, instead she picks a word to define the upcoming year.

Last year at this time I didn’t make formal resolutions, but I met some goals and fell sadly short on others. This time I took a lesson from Holly and picked a phrase to navigate me into the new year.

No matter what happened this year, 2011 heralds new beginnings. My newest niece is walking, my late aunt’s granddaughter is beautiful and loved, my older son continues to heed the call of his Viking blood, and my younger son gives me unmitigated joy.

And I get to wear my pajamas to work every day.

Posted by Pam Andrews Hanson at 6:47 AM 2 comments: 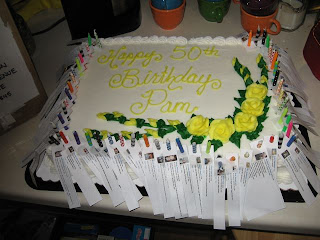 I’m a whiner. I admit it. Not about the big stuff but the middlin’ stuff like shoes that pinch and birthdays that end in zero.

So I spent most of 2009 whinin’ and complainin’ about turning 50, which I did last December 26th. I shoulda just kept my trap shut since I had the best birthday ever thanks to my wonderful friend, Leigh Limerick Rosenecker, formerly of North Carolina, currently residing in Morgantown, West Virginia.

As I wrote last year in this space Leigh, “mom extraordinaire, ace cake decorator and one-day Jeopardy champ, set up a Facebook group to secretly gather 50th birthday greetings for me. She printed the messages out, cut them into strips, punched holes and stuck multicolored birthday candles into them before mailing them off to my husband.”

Once I stopped crying, I had simply the best birthday ever. New friends gathered to help me celebrate as my cake with 50 candles blazed, the greetings from family and old friends more warming than the flames.

Tonight when the clock strikes midnight Leigh hits one of those ‘ends in zero’ birthdays. And I want to wish this extraordinary friend an extraordinarily happy birthday.

We met one summer nearly a decade ago in room three of Martin Hall, home to the school of journalism at West Virginia University, in a reporting class I was teaching. She was an ‘adult student,’ along with our still-friend Steven. Her presence left one classmate ‘star struck’ because he’d grown up listening to her father, Doug Limerick, a longtime radio newsman /sometime replacement host for Paul Harvey.

Her presence immediately enriched my life. Some people tell stories; Leigh is the story. When she started talking in her rich voice ripe with traces of her North Carolina-ness, I never wanted her to stop. Whether it was about making biscuits on an old cast-iron stove or covering a story for her then employer about antique firearms, I wanted to hear more.

Leigh’s heart is as big as her talents, which include writing, baking, being smart (‘Nice girl but about as sharp as a sack of wet mice,’ is the self-effacing Foghorn Leghorn quote she embraces & uh, Jeopardy big bucks winner!) and mothering. She has two adorable towheads, Colin and Charlie.

Because it’s your birthday, Leigh, I won’t make any comments about Alton Brown-like hairstyles! Leigh is not a fan of Mr. Brown and should probably be the next Food Network star, though she shuns the spotlight.

This woman is stunning and funny and warm and sincere and ribald and clever and the best friend, the kind you can just pick up with after months of only conversing via a social media site.

If you were the 21st century equivalent of the little match girl, Leigh would take you in, warm you up, introduce you to her goldfish, and feed you cookies.

And if you were a whiney, cranky woman on the verge of a nervous breakdown over a date on your birth certificate, she would gather up words, your most cherished thing (besides your own children) and shower you with them.

Thank you again, my dear friend. And Happy Happy Birthday!

P.S. Your real present will be in the mail…

Change is gonna do you good…not! 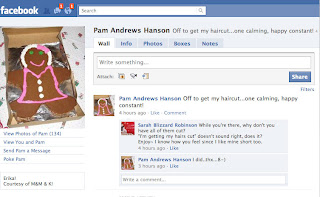 According to recent news reports, the social media network Facebook is trying to replace LinkedIn as a professional connection service.

Okay, did you or did you not find that paragraph borrrring?

That first graph exemplifies what is happening to Facebook, a wonderful amalgamation of a ‘globalvillagecoffeeklatch- sixdegreesofkevinbacon’ experience.

As a former journalist I have nothing against the sacred five w’s and an h, but I don’t want the first thing I see on my friends’ ‘profile’ pages to be where they went to school, who they’re married to, and what their occupation is.

Instead, give me a ‘personal’ barometer about how they’re feeling, the ‘h’ being the most neglected of the journalistic canon.

Yes, it’s just trading one kind of egomaniacal labeling for another.

But it’s that connectedness of the non-professional kind that makes social networking ‘social.’

I am not an advocate against change, having gone to three high schools and two colleges and having lived in five, count ‘em, five states.

Normally I embrace big changes, though I must admit smaller ones like a new pair of shoes or spectacles throw me.

Being a child of change is the very reason I adore Facebook. Or did. On any given day Facebook ‘newsfeed’ tells me how one of my very best friends from elementary school days in a frigid Great Lakes state is faring during a cold spell in her adult home in the south or how special former students of mind are doing in the ‘real world’ of marriage, parenthood, and work. Mark Zuckerberg’s brainchild (his movie pretend girlfriend was right; he is a jerk) allows a connectedness and interaction that transcends geographic and historical boundaries.

Now Facebook wants the first thing I see about my friends on their homepage to be where they went to school. I need my media scholar husband to explain the particulars to me, and I’m sure the ‘newsfeed’ will still feed me pertinent news, but in the end, I don’t want resumes.

I want the first thing I know about the boy with the curly hair and wool sweater whom I never kissed but probably should have 30 years ago, is that he’s having a good day with his son.

Professionally that knowledge is useless, but personally…it’s priceless.

Posted by Pam Andrews Hanson at 8:00 PM No comments: