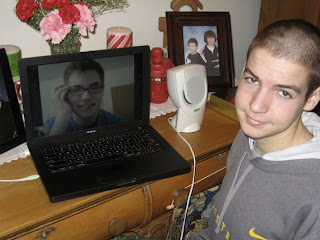 When Erik went to Germany the first time, as a high school foreign exchange student, my husband and I told his younger brother that life was going to be ‘all about him.’ We said this to help him cope with the fact his only sibling would be gone for a year. Despite the fact that Erik once stuffed a sock in Andrew’s mouth (the jury’s still out on the deservedness of the action), they get along pretty well.

And, whereas pre-schooler Erik once said to us in a mournful tone “I liked it better when it was just the three of us” regarding his new baby brother, Andrew wasn’t really prepared to live like an only child.

This spawned a little ‘ditty’ called, appropriately enough, “All About Me” (think “Pants on the Ground,” only not nearly as catchy).

I thought about the title of this tuneless little tune this week, but not for reasons that originally had anything to do with my sons.

The old post entitled “All About Me” started this way:

Day 8.5 of no stress-related/recreational sugar products, ready to gnaw on the landline phone...but other than that...okay...I think?

Ever since the night I dove into a Ziploc bag of leftover holiday M&Ms when Erik and Morgan called to say they were stranded in Denmark by “Storm Daisy,” I’ve gone cold turkey on sweets.

It’s time to cut out the stress munching and crunching so I’m being “All About Me.”

Only writing about eschewing sweets and upping the exercise bores even me.

To quote my dear mom, “You’re not going to write about fat again are you?”

Now posting diet/exercise related Facebook statuses and talking about it with friends who commiserate is okay.

But writing a blog post called “All About Me’ and making it all about ME is, in the end, not me.

Ever since I held that first tiny six-pound ‘monkey’ baby in my arms and later his more-than-eight pounds sibling, it’s been wondrously, gloriously about them.

No reason to change that now.