The worldwide news this week has been horrible, with chaotic storms in northern Europe and a major earthquake in Haiti. At least in my own little corner, my older son and his girlfriend are safely back in Germany. This weekend they’ll head to Berlin so she can fly home. A couple weeks after that, he’ll head home too.

He’s a restless one but going to stay put for a while, relatively speaking.

So I should be breathing easy, but I’m not. My beloved Aunt Judy, my mom’s only sister (and younger than her by five years) suffered a stroke due to soaring high blood pressure. She may have also had a small heart attack. As I write this, we’re waiting to hear when she will be moved out of ICU into a regular room.

When I was eleven years old, my grandmother took me on a trip to visit Aunt Judy in San Francisco. My aunt was married then, her son was just a toddler and she owned the biggest, scariest, laziest Doberman Pinscher in the world. She took us to the Japanese Tea Garden and a fancy restaurant where I still remember what I ordered: Chicken Cordon Bleu.

She’s a gourmet cook, expert seamstress and grandma to two blond boys she dotes on. When I was in high school, Aunt Judy made me two gorgeous silky Qiana (it was the 70s) dresses. I can count on one hand the number of times I’ve worn a dress that had cleavage peeking out. Aunt Judy crafted one of those dresses, and I wore it under my high school graduation gown. Before I went off to college, I took the train to go visit her because she said she’d take me shopping for new clothes. I don’t like to shop. It was the best shopping trip ever. We must have hit the mall (they did have malls then) for eight hours or more. 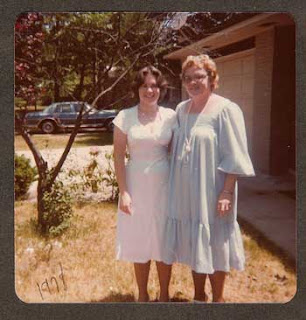 In the mid-fifties, my mom and Aunt Judy went together on a school trip to Europe. They flew over the English Channel in a wobbly plane during turbulent weather, had a marvelous time visiting the British Isles and managed to look smart and sophisticated while traveling. 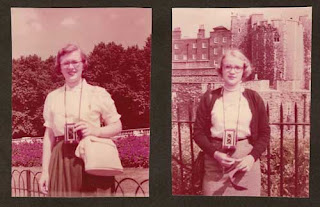 When we visited Erik in Germany two years ago, I wore a sweat suit that still makes poor Andrew cringe if I dare wear it around the house. Yes, it’s that ugly.

My Aunt Judy is a mother, a grandmother, a sister, a cook, a quilter, a wonderful woman who’s been special in my life since I was an errant toddler at her wedding, emptying all the near-empty champagne glasses into my mouth.

She sent me a note when I first starting writing this blog, raving about it. Of course she is biased.

“You are simply great, Pam,” she ended her note with.

You are simply great, Aunt Judy, you are too.