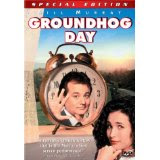 A couple weeks ago I wrote the following…and then didn’t follow up. I got busy with the business of writing, and the moment that spurred the words below passed. Momentarily.

You know those platitudes your parents spouted to comfort you in tough times? Phrases like ‘when the going gets tough, the tough get going’?

C’mon you know what I’m talking about. You use them on your own children. I do.

Being a parent is sometimes like being stuck in that Bill Murray movie ‘Groundhog Day.’ Murray’s hapless weatherman character is forced to relive the same strange day repeatedly, until he gets in right. The more we tell our children whatever woe they’re experiencing is a ‘character-building experience,’ the more we get it wrong.

Oh, the advice is accurate and the words spot-on…but, honestly, how much good are we really doing?

Please don’t misunderstand me. I’m not advocating being anything but the supportive, nurturing parent. However, when spouting all the ‘blah blah blah,’ remember to throw in a line or two about how you know this won’t make things better. Because it won’t.

But it will remind your kid you care. Try to listen more than talk. Listen to what they don’t say as much as what they do say. And don’t remind them you’ve been there and survived. It’s not about you, it’s about whatever your son or daughter is working through.

And they will get through it. And move on to the next thing, just as we did at that age.

Nobody ever said it was gonna be easy.