A blizzard plunged the mid-Atlantic region and the East Coast into chaos over the weekend, dumping snow, snarling travel and sending Weather Channel reporters scrambling for shelter. A couple weeks ago a large storm hit here in the Midwest, but since fewer people and less major airports were involved it didn’t merit around-the-clock television coverage.

Nineteen years ago a similar spell of weather affected this part of the country, stretching into the Southwest. It was so cold there was even snow on the ‘cactuses.’

Snow dusting the prickly pears down in Phoenix became part of the ‘mythos’ surrounding the December 21st, 1990 birth of our first son, Erik, in Flagstaff, Arizona. It was so cold in ‘Flag,’ as the locals called the town nestled at the foot of the San Francisco Peaks, that the pipes in our townhouse froze. My doctor finagled another night’s stay for baby and me so we didn't go home to no water.

My parents braved the bad weather and flight delays to come out to see their first grandchild. At six pounds, Erik was so tiny we called him our little monkey baby. Every year on his birthday, I pull out the scrapbooks (old-fashioned notions in this digital age) and marvel at the small, serious infant cradled in his grandmother and grandfather’s arms that first Christmas. His father looks tired but happy, and I look exhausted.

You start to collect the stories of your baby’s life through photos and memories. The endless sleepless nights that give way to finally sleeping through the night…or not as the case may be with Erik. Thanks to Facebook, even though he’s a world away, tucked behind the old ‘Iron Curtain’ on study abroad on his second sojourn to Germany…I can see he still stays up all night.

Parents of newborns don’t have time to ponder deep truths, such as the goal is to someday have them leave you and go out on their own. Constant diaper changes, 2 a.m. (and 3:00 a.m. and 4 a.m.) feedings, teething, and ear infections all keep a weary mom and dad occupied. Before you know it, your baby walks and talks and turns that milestone of one. 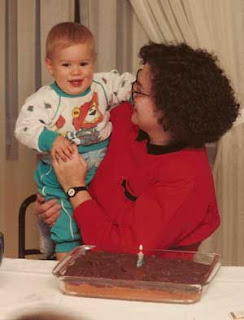 Sooner or later, that toddler gets toilet trained and the momentous first day of kindergarten comes.

Then one day you’re sitting with your spouse at a departmental beginning-of-the-year picnic, and your high school sophomore wanders up and tells you, out of the blue, that he’d like to go to Germany. Glibly, parents say in unison “Find a way to pay for it.”

So your child does and off he goes, at 16, to a foreign country for a year as an exchange student. He writes a new story of his life. The Cliff Notes version: he gets accepted to college a year early, comes home, drops out of high school, gets his GED, goes to college a year early. Then goes back to Germany on a university exchange program.

I was afraid for a moment when we left the hospital 19 years ago that the nurse wasn’t going to give me my swaddled-in-yellow-bunting baby. Somehow I though she was going to tell me I hadn’t studied the mythical ‘parenting manual’ enough and was going to flunk motherhood.

The manual doesn’t exist, and motherhood is a fluid occupation. You love them, and squeeze them and roll with the punches.

And collect all the stories you can.