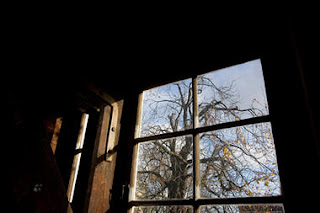 “The apple doesn’t fall too far from the tree” is a common expression around here.

Whenever I mimic my mom’s behavior or one of my sons reaffirms his parentage, I utter that expression. I’m curious about the origins of that saying and should put my friend Holly Jacobs on it. She recently enlightened me on the meaning of ‘getting down to brass tacks.’ Romance writer Holly, an Erie, PA resident, and I ‘talk’ via e-mail every day and have for years. Without her boundless optimism, I’d be lost.

Originally I’d planned to blog about a story I read in this morning’s Omaha World Herald about a storm that felled the ailing chestnut tree Anne Frank gazed upon while hiding in the jam warehouse in Amsterdam.

Three springs ago on a trip across the pond, I gazed at that sickly tree and tried to imagine my sons unable to go outside for two years. When they were little, I couldn’t imagine them going more than two minutes without going outside. Last fall, I wrote about Anne and her father.

My intent was to write about my appreciation of trees, my love for my children, the irony of moving to a state (Nebraska) that is the home of Arbor Day yet lacks trees, my 7th grade science project in Sault Ste. Marie on Dutch Elm disease, and the universality of a parent’s love for a child and the horrors inflicted on all of humanity by evil.

Kind of an overwhelming agenda.

Instead, I will just murmur a quiet thanks my babies are growing into fine young men. And I’ll remind myself the most important part of holding on is letting go.