In many ways I adapted a traditional parenting style, from trotting off to the pumpkin patch years ago with his kindergarten class to chaperoning a 7th grade field trip to NYC.

Okay, maybe that wasn’t exactly conventional, but I’d already done the aforementioned autumn trip, the ‘farm’ (famous for baby animals and torrential downpours) and the international festival at the university student union.

So the week before Thanksgiving six years ago, I boarded a bus along with several other hale and hearty (or foolhardy) parents and a few grandparents -- Big Apple bound.

Let’s just say some people embrace the role of chaperone more ‘heartily’ than others. This is how my group ended up with Max, who became one of Erik’s best friends.

Erik’s friends are an adventurous lot (their parents a courageous, supportive cadre). Currently two are doing ‘gap’ years in Slovakia and Chile. The spring of Erik’s sophomore year in high school, he and several of his friends participated in a trip to Guatemala. That summer we drove then 16-year-old Erik to DC, the first leg of his first trip to Germany.

Life is divided into different kinds of people. Some have curly hair, some have straight hair. Some are wanderers, like Erik and his dad. I swear the ancestral blood of Erik the Red flows like lava through the veins of my husband (technically he has strong Danish roots, but a viking is a viking). When we lived in West Virginia, dh once rode his motorcycle to Ohio…via Buffalo, NY.

Erik is no different. When he was little, we lived in Flagstaff, Arizona. I belonged to a faculty wives’ playgroup. We’d get together, and the children would play and the moms would drink tea…and my toddler would be tryin’ to head for the Mexican border.

Others, like my mom and me, are ‘castle builders.’ She’s traveled extensively over the years but is firmly rooted to the notion of home. I loathe the act of travel (unlike the gleeful men in this family, younger son included) but do enjoy seeing things. I just am awfully fond of home, wherever that may be. 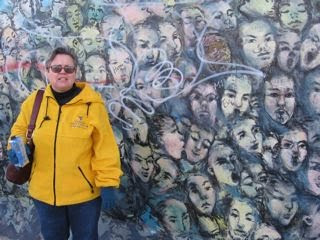 Monday marked the 20th anniversary of the fall of the Berlin Wall. In spring of 2008, my husband, younger son and I flew to Germany to visit Erik for spring break (tad chillier than Ft. Lauderdale). We walked those streets, visited the cluttered testament that is the Checkpoint Charlie museum and stood next to the Brandenburg Gate.

Easter Sunday we took the train to Amsterdam and visited the Anne Frank house. Erik had gotten us tickets on the Internet so we could bypass the long lines waiting in the falling snow.

A videotaped interview with Otto Frank played as the queue filed through the last of the cramped twisty quarters. His words still resonate. He spoke of his daughter being a ‘typical’ teenager. I marveled that I never knew the 'house' where the Franks and others hid was actually quarters above a jam warehouse. It wasn’t important to Anne so she didn’t feel the need to mention it. I tried to imagine what life must have been like, especially for the children, never being able to go outside or make noise during the day for fear of exposure. Otto Frank spoke of what an ordinary teenager she was, and that’s what made her so extraordinary.

I am thankful every day my children can and do.