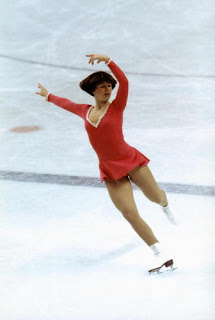 This morning at step class, without really thinking, I put risers under my step. I wondered why it felt like an even more intense workout than usual. Of course when I actually stumbled off the side of it, I didn’t question the height because I know I have two left feet.

Yes, I can chew gum and walk at the same time, stay on a treadmill without falling off and actually cross-country ski. But that’s the extent of it.

In 7th grade, I used to go out night after night in the frosty northern Michigan winter to skate on the makeshift ‘pond’ between our house and the neighbors. Maybe skate isn’t quite the right word for the non-stop, not-graceful back and forth shuffling I’d do in my pristine white figure skates.

My younger sister and brothers became pros on the ice. Both Steve and Mark played hockey, even though they came to the sport ‘late’ (they weren’t toddlers when they started).

It’s winter Olympics time, and for years I watched the figure skating and ice dancing competitions. A huge treat as a kid was doing to an ice show. My favorite haircut to this day is the Dorothy Hamill wedge…I think I’m growing it out again right now….

However, finesse on figure skates has always eluded me. Even now when I bring up wanting to learn my husband recoils in horror. My aging body hitting the ice is too much for the poor man. I haven’t even told him about the step class this morning.

I have similar affection for dancing. My only foray into lessons came at age four when we lived in a Detroit suburb and resulted in an affinity for the little bus that picked me up to take me to the studio. Since I now also avoid public transportation at all costs, unlike dh and older son who revel in it, I guess riding the bus didn’t ‘take’ either.

After a month and a half of zumba at 5:45 a.m. at the local Y, I may have found my outlet. This week I was usually mamboing left when everyone was mamboing right, but it doesn't seem to matter. As long as you keep moving, according to the instructors and the poor women standing next to me, that’s all that counts.

I may have even mastered the salsa step. I’m still better at eating it than dancing it, but it’s a start.