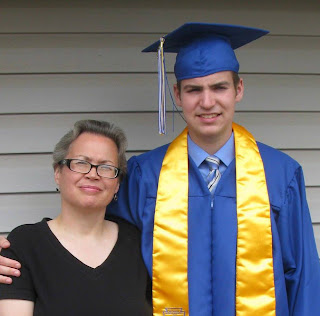 In a few weeks my youngest son moves into a dorm at the University of Nebraska at Kearney, which is two minutes away from our house. The way I’ve been carrying on you’d think he was headed for a college campus thousands of miles away.

I’ve spent a lot of time this summer pondering why I could have been so stoic when my older son left home at 16 to be a foreign exchange student in Germany – and never looked back. He now resides in Seoul, South Korea.

Thanks to my mom, some good friends (thank you Susan and Karin) and years of lecturing parents of incoming freshmen on ‘holding on and letting go’ in a previous life as a college adviser at a big university back east, I know the answer: It’s the end of an era.

The empty nest is truly upon me. No turning back  to the days of field trips to the pumpkin patch and parent-teacher conferences.

As I was writing the above several days ago, my husband passed on e-mail about the move-in schedule for my son’s newly refurbished dormitory.  With each stroke of the keyboard, I was wracked with guilt for feeling sad when other parents have to let go in much more permanent ways.

Last week a 12-year-old boy from this closely knit community died in an accident a few towns away while visiting relatives. He and his parents attended/attend the same large church my family does, and his older brother was in my cohort of confirmation kids, although not in my small group.

The morning of his funeral, despite the good advice of my mom and my wonderful friend Karin, I went to the standing-room only service. I sought Karin’s advice because this  extraordinary mom of a teenage daughter eloquently and tenderly chronicled in her newspaper column the death of her other daughter several years ago--as a baby to a rare disease.

Through the plate glass windows behind where I sat, in the overflow seating in the narthex, I watched the sky cloud over and raindrops spatter the glass. I listened intently as our insightful minister told those assembled that “twelve-year-olds are not supposed to die” and exhorted the congregation to celebrate the deceased boy’s life. Pastor Gary read letters from the late boy’s teachers extolling his heart and kindness. He said not to seek answers where none are available, instead to celebrate this boy’s life – a kid who chose to be an organ donor in his young years.

In the overflow section, I sat by a display board extolling the boy’s elementary and middle school accomplishments. I couldn’t stop looking at the smiling pictures and the certificates honoring his exemplary achievements. Just a couple months ago, my own graduating high schooler and his friends had similar boards on display at their graduation parties. I likened the round of celebrations to cotillion season in the long-ago south. It was such a joyous time.

That rainy morning was saturated with sadness.

As the video montage of pictures of the deceased boy and his family played, I wept as did everyone else. Again, recently I’d sat in that same church with my youngest son and husband and other families at a luncheon honoring high school seniors.

I had trouble sleeping the rest of the week.

This weekend at Sunday brunch conversation at our house turned to college move-in day and activities for incoming freshmen, as well as packing and shopping. My youngest son’s enthusiasm was contagious.

I’m done mourning the end of one era and am ready to embrace the knowledge my youngest child is moving on to a new phase of his life.

Because somewhere another mother’s child is not.

I have to let go--but in a way that makes me want to fall on my knees and be grateful for the opportunity.
Posted by Pam Andrews Hanson at 1:42 PM