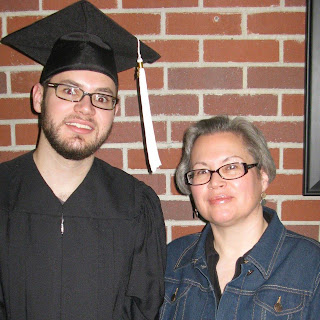 Being a mother of a certain age, some days I  can’t remember to put the lid down on the washing machine or whether I put milk on the grocery list –or where said list is.

However, I can remember with crystal clarity where I was 22 years ago today: giving birth to my first son, Erik. He was born at 5:54 p.m. on a Friday in Flagstaff , Arizona during one of the coldest winters on record.  Snow even blanketed the cacti outside of Phoenix.

Last Friday Erik graduated from college. I sat with my mom waiting for the ceremony to begin while my professor husband was down on the venue floor as part of the processional. To strains of ‘Pomp and Circumstance’  I imagined the words of the host of the reality show  Amazing Race as the winners cross the finish line: “Three continents….”

During his academic career, Erik studied abroad in Europe and Asia. With snowstorm  Draco hitting the prairie earlier this week,  my mom and I were reminiscing yesterday about Storm Daisy that hit Denmark a few years ago – stranding Erik and a friend in his father’s ancestral homeland.

Being a parent is an adventure. Being the parent of an adventurer adds a whole new dimension of worry  and yes, pride.

My Grandma Rock always poked her head in the car window as we (my mom, my late father and my younger sister and brothers) prepared to leave her house after visiting. “Be careful” she’d say and add “Don’t forget to call when you get there.”

For the most part those half hour trips home were uneventful except for the time a deer ran in front of the car, the animal flipping up over onto the hood, sending glass shattering into the car and a hoof grazing my mother’s cheek  - below her eye.

My brother Steve, sitting in the front seat between my parents (this was the old days), was wearing a little sailor hat with the brim turned down. All weekend my grandmother had advised him to turn the brim up the way the hat was supposed to be worn.

The downward turned brim kept the glass out of his eyes.

We’d been on this trip to Kalamazoo, Michigan to buy a bunk bed for my sister and me. Joan and I must have been maybe in second and third grade. I don’t remember.

I do remember once the bunk bed was assembled,  I rolled over the first night (I wanted to sleep without the safety bar) and landed on the floor. Unhurt. But I did want the protective railing after that.

With one child ‘launched’ and another due to graduate from high school in May, I sometimes long for that safety bar.

But I’m not sure whether I want it more for them – or me.