I am not a camper. My idea of ‘roughing it’ is staying at a Holiday Inn. My few experiences sleeping under the stars have done nothing to disabuse me of this notion.

In 7th grade my science teacher, Mr. Herring, decided to take half a dozen of his students camping in the woods. In October. In northern Michigan. I’ve never been so cold in my entire life. Later, he told my parents (not unkindly) I was the worst camper he ever had. 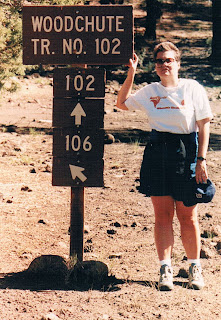 I took it as a compliment.

Many years later while living in Arizona, my husband and I wanted to climb the nine-mile Potato Patch hike overlooking Jerome and the Verde Valley. The Grand Canyon is visible at a distance. He assured me this involved pitching a tent at a very nice campground. Sleeping on the ground, even in my 20s, was not my cup of tea, the clincher was the bathroom ‘facilities’….or lack thereof.

That was our first and last camping trip.

Over the years he’s looked longingly at little pop-up trailers and talked wistfully about the fun we could have in our retirement traveling around the country. He also used to hold out hope I’d actually get on the back of his motorcycle again (as I did for a brief period in college when we first met).

Then I discovered (thanks to my late great writer friend Mary Rodd Furbee) ‘writers camp” for adults. For more than 30 summers, West Virginia Writers, Inc. has held a conference where like-minded people can be revitalized creatively as well as make new friends and reconnect with old. As long as I’ve been going the locale has been Cedar Lakes Conference Center in southwestern West Virginia. Cedar Lakes offers charming rustic cabins and a better-than-many-hotels lodge. Geese, a covered bridge, and a lovely little chapel also dot the landscape. Gentle rolling hills envelope the area. 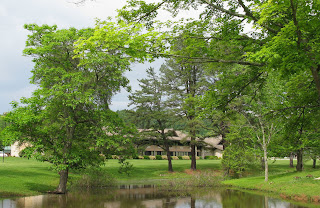 Attending year after year to see old friends, make new, and get those creative juices flowing is akin, I think, to the fond memories many people have about traditional summer camp.

My dad tried to send my four siblings and me to summer camp one year, but we all came down with chicken pox. Darn. However, I revere and embrace the few days I spend each summer at Cedar Lakes at the best little writers’ conference in the country.

Past presenters have included Gretchen Moran Laskas, author of ‘The Midwife’s Tale,’ an Oprah book club selection; the indomitable Lee Maynard; Cheryl Ware, from whose pen the delightful children’s series featuring Venola Mae books took flight; Brad Barkley, an award-winning novelist; Jim Minick, whose memoir on starting a pick-your-own-blueberry farm with his wife garnered a multitude of rave reviews plus a whole host of talented others. This year, Cheryl and Jim will be back to present workshops, and Lee will be reading from his latest book. Pitch sessions to an agent and editor are also available. And it’s not too late to register.

Camaraderie, creativity, and best of all…no camping on the ground.