"The great secret that all old people share is that you really haven't changed in 70 or 80 years. Your body changes, but you don't change at all. And that, of course, causes great confusion." -- Doris Lessing

Earlier this week I paid five bucks for a small cup of black coffee at a local bakery café. No I don’t live in Seattle or New York City. The caffeine actually only cost me a dollar, but I left the change in the tip jar.

Somehow the adorable 20-something barista and her sweet-as-pie 30-something co-worker and I got on the subject of age. Twenty thought I was her mother’s age and thirty concurred, which would put me roughly a decade younger than I am. No, I didn’t ask them if they needed new glasses, but I did leave a 400 percent tip. Made my day, even though I am still skeptical about their eyesight.

Part of it is the gene pool. My maternal grandmother smoked, drank, and sunned and didn’t look ravaged by age. My mother doesn’t smoke or drink. She has an aversion to garlic and eschews the sun. A waiter once asked her, quite seriously, if she was a vampire. She’s not. But she does look younger than her chronological age.

My chubby face helps I guess, but lately I’ve spent a lot of time peering closely in the mirror. Fine lines are etched around my eyes, freckles (age spots?) have appeared where none were before (I spend a lot of time in the summer walking in the sun), and then there’s the gray hair.

I stopped dyeing years ago, preferring gray to the black or brownish-orange hues that always resulted. When I started the process of un-processing, one of my friends was horrified since silver telegraphs a person’s age much more loudly than dyed tresses do.

When it comes to ‘maintenance,’ I’m low or no, a trait my husband appreciates (and which helps make up for some of my less…charming…characteristics!). 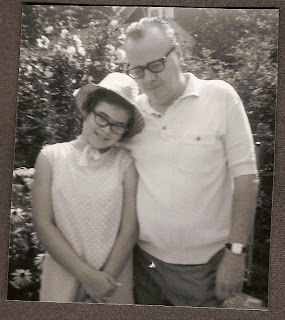 When I was approaching 50, the one person who could console me was my 90-year-old great aunt. You really can’t complain to someone her age that 50 is old.

My late Grandpa Rock would have been a century plus one on Thursday. He died when he was just sixty and I was ten, setting off what seems like a long pattern in my life of people I love and adore going way before their time.

So I’ve decided to spend less time on narcissistic nose-pressing against the mirror, and more on aging, if not gracefully, gratefully.