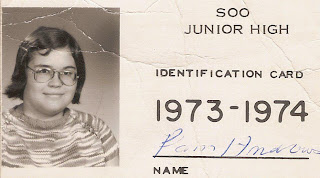 At noon today I headed to the YMCA for a ‘last chance’ workout with two young trainers who I was sure would kick my aging posterior. Instead I left exhilarated after an hour on the treadmill, elliptical, and weight machines followed by a great bout of stretching to cool down. This special session is part of a a three-month program called ‘Resolution Solution.’

Last January the Y offered another program where participants were challenged to do things such as attending different exercise classes for one week. When it comes to group exertion I’ve always been a lone wolf (or a cowering coyote!). The only exceptions were an aerobics class I took 20 years ago after the birth of my first son and a faculty wives hiking group in Flagstaff that introduced me to the splendors of the Southwest and the strain of switchbacks on my then-young knees!

But with my neighbor encouraging me, off we went to 5:45 a.m. classes.

Did I mention I also have NEVER been a morning person?

One year later I can say that nearly every weekday morning (except for Thursdays in the summer when that day’s instructor ran a Boot Camp, which I will never do!) for the past year I’ve gone to a combination of zumba, toning, body sculpting, and step classes.

The variety, the awesome instructors, the camaraderie of a great group of women, the decision to approach getting in shape at fifty as a lifestyle change rather than a diet...all were factors.

And I’ve been processing for a long time.

I have this little ‘obsession’ that drives my mother and husband bonkers…and rightly so. Beginning when I was 9, I can recite from memory what I weighed most ages of my life. (3rd grade 89 lbs.; 4th grade, 120 lbs., 5 foot two and 3/4th’s…oh to weigh that now! And the list goes on.)

On two occasions (and I’m now slowly aiming for three) I have lost (and eventually regained) a significant amount of weight. The first time was the summer between 8th and 9th grade. At the end of 8th grade we went on a picnic to a park on the shores of Lake Superior and were joined by high schoolers as chaperones. It was a different era. One boy was so beautiful he took my breath away, and I still remember thinking if that’s what awaited me in high school, maybe I wanted to lose weight. So I did.

My starting weight in May 1974 was 175 pounds. I lost 20 pounds that summer (through a combination of staying at my grandmother’s and eating following her diabetic diet and by counting calories when I got home). By January 1975 I was down to 130 pounds. Okay it’s a big obsession with me. For the record, there were gorgeous guys in that high school.

Over the years, the pounds crept back on. By the time I hit 40 I was at an all-time high, precipitated by hitting George Foreman-worthy numbers during my second pregnancy a few years previous. Then my foot-taller husband was diagnosed with diabetes and lost 65 pounds. I didn’t want to be the fat wife of the thin man so I promptly…gained nine pounds that year, going from 180 to 189. Did I mention I’m five foot two? (I lost the ¾’s somewhere along the way.)

Then I lost more than forty pounds again on the what I call the ‘stress and grief diet.’ Please don’t try this at home. I’m a stress eater but this time the stress level was so great, it took my appetite away. My spouse’s diabetes was followed by a cancer scare, and that was followed by a horrifying period. A dear friend died at the age of 49 at the same time my husband fell ill with a mysterious ailment. While sick, he continued to work long hours at his job. Unable to eat much more than cottage cheese and apple slices, he got dangerously thin. And for the first time in my life, I was too distraught to to eat. The diagnosis was his liver having a horrid reaction to a cholesterol drug change, and he recovered fine. But there was a point where I worried he was going to die. He wasn’t, but….

The weight I dropped didn’t come back for a while, but then my Viking-blooded older son took off for a year at the tender age of 16 to be a foreign exchange student in Germany. That combined with the usual stresses of being a working mom, packed the pounds back on. Food (and my friend Susan whose daughter, Emma, had also been on an exchange program) provided comfort.

Then came a cross-country move. I made a difficult transition from working outside the home fulltime to fulfilling my life-long dream of writing fulltime. Finally last December found me with my head in a bag of holiday M&M’s, stress noshing. The same son was in Europe again on a college study abroad program, and he and his girlfriend were stranded in Denmark during a wicked snowstorm.

I had an epiphany a year ago right then and there among the red and green M&Ms. Candy (cake, cookies, brownies, fudge, chips, dip, name-your-poison) isn’t the answer to anything. This is a continuous struggle for me. People gave me fudge for Christmas, which I ate. However, I did leave the holiday M&Ms I bought unopened.

The point of all this is baby steps.

At the first meeting of Resolution Solution at the Y on Monday night, one of the trainers advised us to set realistic goals for the 12-week program. We weighed in that night and will weigh in at week six and week 12. Until last year I would have set as my goal, 24 pounds in 12 weeks or 30 or…you get the idea.

I will never stop obsessing over the numbers on the scale. After all, I was the only layperson in the crowded room who knew how many calories are in a pound (3,500).

But I will continue to try to pay attention to how good exercise makes me feel and how bad candy is for me. If once in a while I want a piece of chocolate (or, more likely, a donut), I will indulge. And I won’t berate myself afterwards.

What do I weigh now? Less than George Foreman and more than I did in high school.

Labels: dieting, exercise, in sickness and in health