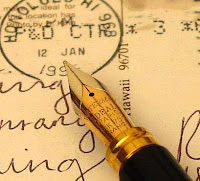 Long before Hello Kitty and stretchy bracelets, having a ‘pen pal’ was all the rage. A magazine, the name long forgotten, matched up pen pals..sort of an eHarmony for the elementary school set.

When I was ten…the age I decided I wanted to be a writer (or the First Lady, or Mrs. Donny Osmond, or save the seals and the environment) a girl named Diane and I started corresponding.

She was a couple years older and lived in Pennsylvania, a fact that just now comes back to me all these decades later. We hit it off and even spoke on the phone several times over the years. We never met but the written word cemented our friendship.

One summer night after my sophomore year in high school (the grade my youngest son is in now), I came home from my job at the ice cream/sandwich shop run by a local pain-in-the-keister businessman. The pay was low, the work was mundane, and at the end of the night we had to make the restrooms hospital-clean.

My mom, my Rock of Gibraltar, told me Diane’s mother had called. Diane and her boyfriend had been killed in a van accident that evening. If my pen pal had lived, she would have been a vegetable.

I sobbed into my mother’s arms, my sophisticated 16-year-old bravado dissolved.

Since then I’ve lost friends to the ravages of disease, but never one whose only connection to me was words.

Cherish the power of words. They have the ability to bind, to wound, to wrap us in a cocoon of love and warmth or shatter our illusions and make us no longer whole.