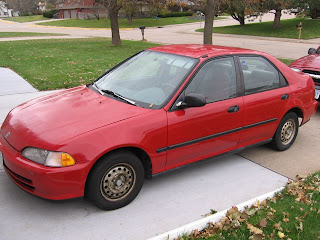 On a recent Saturday, my husband and a work buddy spent seven hours (I clocked 'em) working on getting our older son's 1995 red Honda Civic with 226,000 miles on it up and running to sell.

It was the running part that took so long.

This little baby got my ‘baby’ to and from college first year, but with said son studying abroad for six months this vehicle needs to go.

I’m partial to red cars…when my over-six-foot husband was in grad school we bought a new shiny red Sprint, the size of a tomato soup can. After that, we had a darker red wagon, and my current car (which I share with my mom, who lives with us) is a red Tracker. The big guy drives a midnight blue Taurus X built on a Volvo chassis. He used to have a shiny red motorcycle, but that’s a different story.

Youngest son is angling for his grandmother and I to get a new car sooner rather than later because he is due to ‘inherit’ the SUV.

It takes a leap of faith and lots of praying when children start driving. My mom always volunteered be the designated ‘rider’ when my older son wanted to go out on the interstate. After going through four kids of her own learning to drive, she was a pro at it. One brother, a teacher, spends his summers instructing driver’s ed.

I’m a nervous passenger. It’s not that I don’t trust my son’s driving, I worry about what the other drivers are doing. Actually, my son, at almost 19, is a much better driver than I am at…well, how old I am has already been discussed!

His making the long trek to and from college his first year to our new Midwestern home in that Honda with 226,000 miles always made me jittery. Naturally, the biggest thing I had to worry about was something I hadn’t even thought of. His father had inadvertently booked him into a hotel in an Illinois city in an unsafe area of town. Really unsafe. When this wandering child expresses doubt about something it must really be scary.

Life is scary. Letting our children get behind the wheel of a car or get on an airplane to fly many miles away from us or go away to college in another town tests our mettle as parents. Sometimes bad things happen when and where we least expect them too.

This is the part where I wrap things up on a positive note, but not today. A high school girl who used to come into the elementary school library where I volunteered died this week. Every parent’ s worst fear.

So hug ‘em and kiss ‘em and hope that you have a mom like mine who will go out on the interstate to drive with them when they need the practice.

Posted by Pam Andrews Hanson at 10:38 AM